Rakesh Jhunjhunwala earns Rs 663 crore from these 5 stocks in 9 days after Budget 2021, these companies

by InvestPolicy
in Finance, Market
0 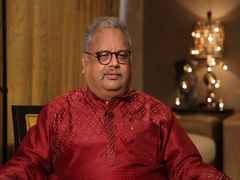 Today, there has been a slight break in the pace of the stock market after the introduction of the general budget. Today the market continued to have ups and downs. In the end, the Sensex closed marginally lower and the Nifty closed with a slight decline. Rakesh Jhunjhunwala has benefited tremendously in these 9 trading sessions from the budget day. Shares of his investing companies have jumped by 50% during this period.

Let us tell you that according to the data available till December 31, 2020, veteran investor Rakesh Jhunjhunwala has bought stocks in 39 companies, whose total value is more than Rs 16,775 crore. In these 9 days since the budget, Rakesh Jhunjhunwala has added 663 crore rupees to his account from these 5 stocks. That is, they have made a profit of Rs 663 crore from the fast in the stocks of these 5 companies. These companies are…

NCC: Stocks of Nagarjuna Construction Company (NCC), an investment company of Rakesh Jhunjhunwala, have gained nearly 50% since the budget was presented. Rakesh Jhunjhunwala’s stake in NCC was 12.84% as of December quarter. The total value of his share in the company on the budget day was Rs 461 crore, which has now increased to Rs 722 crore. He has earned a profit of Rs 260 crore in the last 9 seasons from this company. The company’s shares closed at Rs 59 on January 29, the day before the budget, whose value rose to Rs 99.65 on February 10. However, the stock of the company has fallen drastically in two days and today its shares fell 6.93% to close at Rs 83.90.

Tata Motors: Tata Motors shares have gained more than 25% since the budget. Rakesh Jhunjhunwala has more than 4 crore shares in this company, whose prices have given him a profit of Rs 260 crore. The value of his share in Tata Motors on the budget day was Rs 1050 crore, which has now increased to Rs 1310 crore. However the shares of the company declined by 0.14% today.

Karur Vysya Bank: Similarly, the stock of Tamil Nadu-based Karur Vysya Bank, another investment company of Rakesh Jhunjhunwala, has gained 37% since the budget. The budget had a special focus on Tamil Nadu, which benefited the company’s stocks. The shares of the company closed at Rs 42.45 on January 29, which has now gone up to Rs 55. However, the stock declined 2.91% from the company today. Rakesh Jhunjhunwala holds 3.59 crore shares in this company. It has earned a profit of 48.57 crores due to the boom in its stocks.

Aptech: Rakesh Jhunjhunwala holds a 23.84% stake in global education and training company Aptech, its stock has rallied 26% since Budget 2021. Its stocks rose 5.74% today and closed at Rs 234.90, which was priced at Rs 179.15 on January 29. Rakesh Jhunjhunwala has gained more than Rs 50 crore due to the boom in the company’s stocks.

Federal Bank: Federal Bank’s share price was Rs 72.4 on January 29, which has now increased to Rs 82.80. Rakesh Jhunjhunwala has added Rs 51 crore to his account in the last 9 seasons from this company. Apart from this, Rakesh Jhunjhunwala holds a 4.75% stake in Tractor Manufacturing Company Escorts and the stock has gained 19% during this period. The shares of the company closed at Rs 1205.70 on January 29, the value of which has now risen to Rs 1421.

Get these benefits including 1GB data and unlimited free calling for just 2 rupees, learn 3 dhansu plan

Get these benefits including 1GB data and unlimited free calling for just 2 rupees, learn 3 dhansu plan