Dating APP Bumble’s dating with Wall Street has been fantastic, with company stocks listed at 77% premium 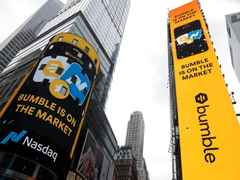 Dating app Bumble (Dating App Bumble) with Wall Street on Valentine’s Week was fantastic. Earlier, its IPO got a great response from investors and now its stock has got the tremendous listing. Bumble Stocks has been listed on the US Stock Exchange Nasdaq (NASDAQ) at a 76.78% premium to its issue price. The company’s stocks opened at $ 76 a share on its listing day today, while its issue price was $ 43 at the IPO.

Bumble shares opened at $ 76 on Listing Day, reaching a high of $ 79.60. However, it later declined slightly and its stock gained 63.51% to close at $ 70.31. With this bumper listing, the market valuation of the company has increased to more than $ 14 billion or more than Rs 1 lakh crore. Bumble is a dating app in which Milan first takes the initiative and chooses who to date with him. Bumble has over 40 million monthly active users worldwide.

Let me tell you that Bumble holds the majority stake in American investment firm Blackstone Inc. Bumble was founded in 2014 by Whitney Wolfe Herd. Whitney was also the co-founder of Bumble’s Rival app Tinder, but she resigned from the company accusing Tinder’s founders of sexual harassment and started Bumble that same year. In 2019, Blackstone Inc bought Majority Stake at Bumble for $ 3 billion and Whitney Hurd remains its CEO.

Rakesh Jhunjhunwala earns Rs 663 crore from these 5 stocks in 9 days after Budget 2021, these companies

IPO’s side and the issue price was increased

Bumble previously placed the issue price for the IPO in the price band of 28 to 30 dollars per share. But the company had now raised the issue price by more than 30% to $ 43. Apart from this, the company had also increased the size of the IPO from 3.5 crore equity shares to 4.5 crore equity shares. Bumble raised 2 billion dollars through this IPO.

Bumble received revenue of $ 376 million between January 2020 and September 2020. However, the company incurred a net loss of $ 84 million in the same period. The company operates two apps which include Bumble and Badoo. However, the company gets more revenue than Bumble. Bumble had 4.2 million monthly active users by the third quarter of 2020, with over 2.5 million paying active users who pay for its services. The company is spread over 150 countries in the world and gets an average revenue of $ 26.84 from each paying user.

Change the rules of gold monetization scheme, what a big gamechanger for economy!