Skip to content
Home
Latest News
These 300cc bikes are amazing in terms of performance and look, buy them quickly

By the way, there are many bikes in the market which are equipped with the best engine. But the bikes we are talking about today have an engine of up to 300cc and in terms of looks, they are quite fun. 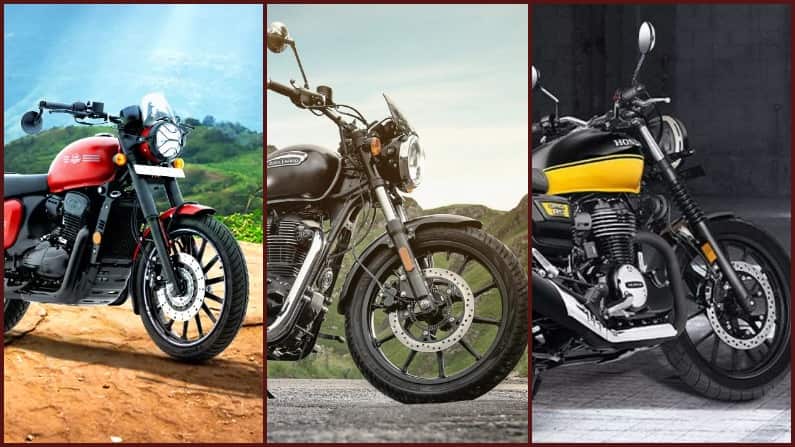 If you want a powerful performance bike at an affordable price in which you get the best riding experience and enjoy running, then this news is for you. Today we are going to tell you about some such bikes in which amazing features and powerful engines have been given.

There are many bikes in the market that are equipped with the best engine. But the bikes we are talking about today have an engine of up to 300cc and in terms of looks, they are quite fun too. So let’s know what is the specialty of these bikes and how much you can buy it for…

Honda CB350 RS – This bike has been recently launched by the company, whose ex-showroom price is 1.96 lakh rupees. It has a 348.6cc capacity single-cylinder air-cooled engine and comes with a 5-speed gearbox. With this, this engine generates strong power of 20.78bhp and torque of 30Nm. Apart from this, you will also get a slipper clutch. At the same time, 310mm disc is given in the front and 240mm disc brake in the back. The CB350 RS uses dual channel anti-lock braking system (ABS) and is built on duplex cradle chassis.

Talking about the features, wide tires have been used in it, which makes the riding even more comfortable and balanced. Apart from this, you will get new graphics with round shape headlamp, black out shock observer chrome muffler, dual tone fuel tank and single piece seat. In the bike, you will also get an analog and small digital display with a single pod instrument console. In this console, you can find information about ABS, side stand indicator, echo indicator, real time mileage, average mileage, smartphone voice control system (HSVCS) and gear position etc.

Royal Enfield Meteor 350- Royal Enfield is a brand that is the first choice of all. The company launched the Meteor 350 in November last year and is currently one of the best selling bikes. The bike is said to be inspired by the Thunderbird, which features a round LED DRL, chunky fuel tank and a round headlamp with pod-shaped tail lamps. Apart from this, the company has also given features like Semi-digital instrument cluster and color TFT display. Apart from this, it has been given a 349cc single cylinder fuel injected engine which generates power of 20.2bhp and torque of 27 Nm. This bike is present in three variants which include Fireball, Stellar and Supernova. Fireball and the Stellar variants come with factory fitted backrests and Supernova variants come with factory fitted backrests and windscreen. The high-spec stellar is priced at Rs 1.81 lakh and the top-spec supernova is priced at Rs 1.90 lakh. At the same time, the price of Meteor 350 fireball is Rs 1.75 lakh

Jawa forty two- Jawa launched this bike to compete with Royal Enfield’s bike. Recently, the company has launched its updated version. Talking about the engine of this bike, it will get an OPCO 293cc liquid-cooled and fuel injected engine that generates 27 bhp power and 27 nm peak torque. In the newly updated Jawa 42, the company has used cross port technology in a single cylinder engine for the first time, which can generate better performance and torque in the bike than before. At the same time, if you talk about the price, the ex-showroom price of Jawa 42 is 1.60 lakh rupees.

Auto companies made huge profits in February, know which company sold how many vehicles

This car of Nissan left all other vehicles behind, the company made this new record in the month of February