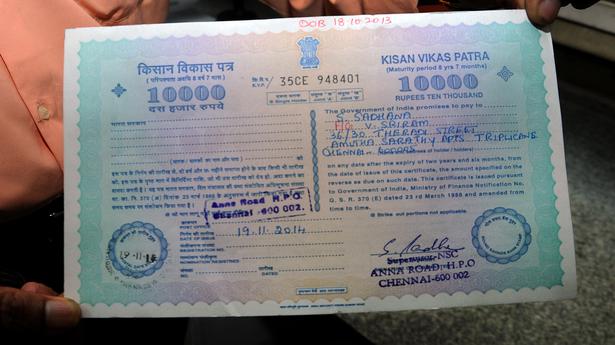 After a long pause, Government effects 0.1% to 0.3% hikes in 5 of 12 small savings schemes for October-December quarter

After a long pause, Government effects 0.1% to 0.3% hikes in 5 of 12 small savings schemes for October-December quarter

In what marks the first hike in small savings rates since January 2019, the government on Thursday announced minor upticks of 0.1% to 0.3% in the interest rates payable on five small savings instruments (SSIs), including the Kisan Vikas Patra, Senior Citizens’ Savings scheme and time deposits for 2 and 3 years, for the quarter beginning October 1.

Rates were left unchanged for seven other designated small savings schemes, including the Public Provident Fund (PPF) at 7.1%, Sukanya Samriddhi Account Scheme at 7.6%, National Savings Certificate (6.8%) as well as five-year recurring and time deposits (5.8% and 6.7%, respectively). Returns on savings deposits and one-year time deposits were also kept static at 4% and 5.5%.

The last time small savings rates were hiked was for the January to March quarter of 2019, just ahead of the last Lok Sabha elections. The rates had been kept unchanged for nine successive quarters since the April to June quarter of 2020 when they were slashed across schemes.

In August, the Reserve Bank of India had noted that the upward movement in yields on government securities (G-secs) has turned ‘the spread between the existing interest rates’ and the formula-based rates ‘negative for most small saving schemes’.

Returns on SSIs are linked to market yields on G-secs with a lag and are fixed on a quarterly basis at a spread of 0-100 bps over and above G-sec yields of comparable maturities. The decision to implement rate hikes on just five of the dozen designated SSIs, would mean that returns would be negative for some of the schemes, such as the PPF in the coming quarter, in relation to the formula, an economist said.

While the return payable on Public Provident Fund (PPF) accounts has been retained at 7.1%, the rate for Kisan Vikas Patra has been hiked from 6.9% to 7% for the coming quarter and senior citizens’ savings will now earn 7.6% from the 7.4% rate valid till September 30.

“With the repo rate going up, government bond yields are bound to rise further. As small savings are linked to G-sec yields, they must increase,” Bank of Baroda chief economist Madan Sabnavis said.