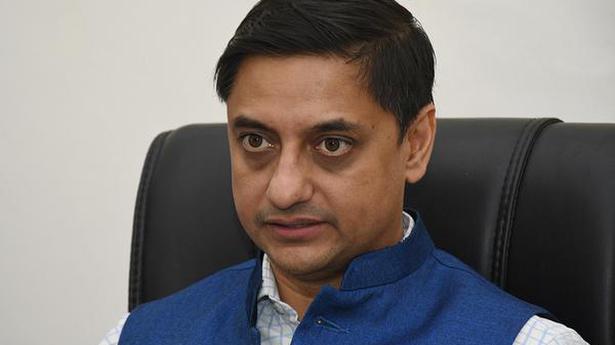 No point targeting a INR/USD level when USD is appreciating against all other majors: EAC member

No point targeting a INR/USD level when USD is appreciating against all other majors: EAC member

The Reserve Bank of India (RBI) is justified in using the country’s foreign exchange reserves to smooth out volatility in the rupee’s moves against the dollar, a member of the Economic Advisory Council said on Monday.

“I think that the RBI is correct to use the FX reserves to smooth movement in the INR/USD… There is no point targeting a INR/USD level when USD is appreciating against all other majors,” Sanjeev Sanyal told the Reuters Global Markets Forum (GMF) in an interview.

“Longer term, we need to maintain overall macro-stability and allow the cycle to play itself out,” said Mr. Sanyal, who was previously India’s Principal Economic Adviser.

The Council he now sits on advises Prime Minister Narendra Modi and the government on economic policy.

The rupee has fallen about 7.4% against the dollar year-to-date but on Monday rose 16 paise to 79.76 compared with the previous session.

The dollar has risen about 11.2% against a basket of currencies as markets brace for more U.S. interest rate increases amid surging inflationary pressures and signs of a weakening global economy.

Mr. Sanyal also said India’s inflation was almost entirely imported and, as an oil importer, something it could do little in the short term to control. Global oil and other energy costs have spiked this year, driven higher by the impact of the war in Ukraine and broader supply chain issues.

Mr. Sanyal said he believed India’s current account deficit was in a comfortable position and, asked if a curb on non-essential imports was being considered, added: “The government will respond flexibly to the situation as it evolves.”

He also said India was treating crypto instruments as assets, and not currencies, and that their regulation would need global coordination.

Nureca’s IPO will open for subscription on February 15, should it subscribe or not? Know the opinion of experts

On government debt, India is much better placed than its peers, says Nirmala Sitharaman