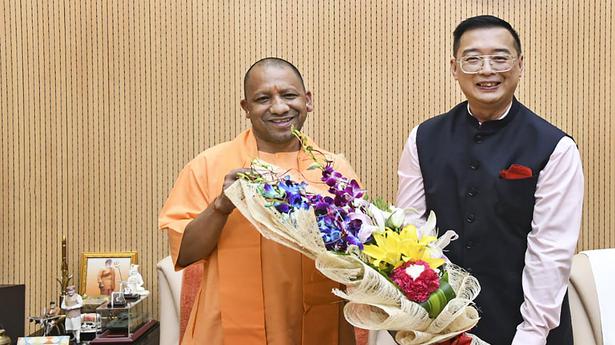 In the courtesy meeting at the Chief Minister’s residence, a delegation from Singapore led by the Singapore High Commissioner discussed ways to further improve the bilateral relations and cooperation in existing fields and ways to expand it, particularly concerning the State of Uttar Pradesh, an official release issued in Lucknow said.

Mr. Wong said that various companies from Singapore have invested about $250 million in Uttar Pradesh. Most of the investments are in Noida and adjoining regions.

Expressing confidence in the leadership of the Chief Minister and lauding the better connectivity and the ease of doing business in the State after 2017, Mr. Wong said that many companies from Singapore are interested in investing in Uttar Pradesh.

“We are encouraging our investors to invest in Lucknow and other parts of the State. The Global Investor Summit will be a good opportunity for these companies. It will be a pleasure to collaborate with Uttar Pradesh in various areas of urban development and planning, including water management. Singapore is willing to work in Uttar Pradesh as per the intention of Prime Minister Modi,” Mr. Wong said.

Terming Uttar Pradesh as his ‘second home’, Mr. Wong said that the Chief Minister has established a very favourable atmosphere in the state.

Taking forward the cooperation between Singapore and U.P. in various fields, Mr. Wong proposed extending ties in the proposed skill university in the State. He said that if Singapore can become a partner in this project in some way, it will be useful in further improving the relations between the two countries.

Simultaneously, Mr. Wong also proposed a programme for the exchange of technical knowledge and skills between the Government of Uttar Pradesh and Singapore. He said that Singapore is ready to provide necessary training for capacity building of State Government officials and employees.

During the talks, Mr. Adityanath said that India and Singapore share strong diplomatic and trade relations, and Uttar Pradesh can play an important role in further improving them.

A Singapore based company has invested ₹1,100 crore in the recent ground breaking ceremony. Stating that Uttar Pradesh is determined to provide an investor-friendly environment, Mr. Adityanath said that about 21 sectoral policies have been formulated according to the needs of the industry.

The need for water and energy conservation was also discussed during the talks. In this regard, High Commissioner Simon Wong told the Chief Minister that work is being done by a Singapore-based organisation to raise the standard of living of about 8,500 families in the Ayodhya district.

In this, every family has been given a smart meter. Families that save water and use the least electricity will also be rewarded. Families are being made aware of ways to conserve water and energy. This is a model through which efforts are being made to make the society aware. Stating the initiative as an exemplary effort, the Chief Minister said that the Ayodhya model can be useful for water conservation, the release added.

Stock in News: These stocks, including Tata Motors, Dr Reddy’s, Wipro, RITES will be in action, keep an eye on intraday