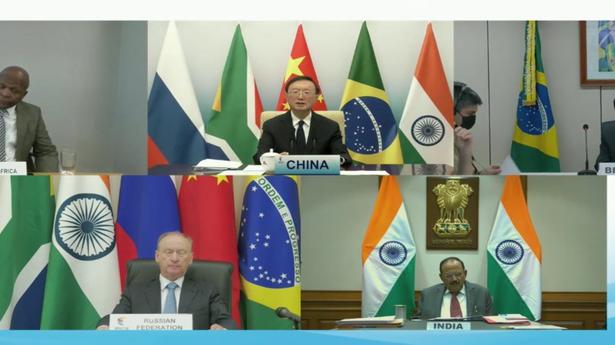 17 Opposition parties to field a candidate for Presidential poll

Kick-starting the consultations on putting up a joint candidate for the Presidential election, 17 Opposition parties attended a meeting hosted by West Bengal Chief Minister and Trinamool Congress president Mamata Banerjee in New Delhi on Wednesday. At the end of the 90-minute meeting, the parties came up with a statement expressing their intent to field a common candidate, but no name was finalised.

As former Congress President Rahul Gandhi went in for questioning by the Enforcement Directorate (ED) in a money laundering case linked to the National Herald newspaper for the third consecutive day on Wednesday, there were tense moments at the All India Congress Committee (AICC) headquarters as Delhi police personnel barged into its premises and dragged out workers, including a former Lok Sabha member. Mr. Gandhi has been summoned again on Friday for further questioning.

Defence Minister Rajnath Singh and Bharatiya Janata Party (BJP) president J.P. Nadda on Wednesday began the consultation process, on behalf of the NDA, for the upcoming polls for electing the new President of India, by dialling key Opposition leaders, NDA allies and neutral parties such as the Biju Janata Dal (BJD).

A day after the Cabinet approved the Agnipath scheme for temporary recruitment to the armed forces, the Ministry of Education on Wednesday said it will launch a three-year bachelor’s degree programme that will give credits to serving defence personnel who avail the scheme.

Eleven people filed their nominations on Wednesday for the Presidential election to be held on July 18, according to Rajya Sabha sources.

A Mathura resident has asked the Supreme Court to direct the government to “ascertain the feasibility” of enacting a “stringent population control law.” Devkinandan Thakur Ji, the petitioner, said such a law would secure the fundamental rights of citizens, including the “right to peaceful sleep” along with “clean” air, water, food, health and shelter. Mr. Thakur said the injury caused by population explosion for women especially was “extremely large”.

Kalyani Singh was under the scanner of the agency for long as it had emerged during the probe that “a woman was accompanying Sidhu’s killer”.

The move announced by the U.S. Federal Reserve will raise its benchmark short-term rate to a range of 1.5% to 1.75%.

A day after Jharkhand police put up posters carrying photographs of those allegedly involved in the recent violent protests in Ranchi, the State’s Home Secretary Rajiv Arun Ekka on Wednesday evening sought an explanation from the SSP over the “unlawful” act.

The Bharatiya Janata Party on Wednesday expelled its Rajasthan MLA Shobharani Kushwah for cross-voting in favour of a Congress candidate in the elections to four Rajya Sabha seats from the State held recently.

Myanmar not part of ASEAN meet

The Foreign Minister of Myanmar is unlikely to be part of the 24 th ASEAN-India Ministerial here on Thursday, an official source indicated. Myanmar’s representation at the meeting has been in focus as India has been under pressure to avoid inclusion of Myanmar in the high-level meeting.

India on Wednesday successfully test-fired its indigenously developed, nuclear-capable Prithvi-II missile during night time as part of a user training trial from a test range off the Odisha coast. The Defence Research and Development Organisation (DRDO) said: “Prithvi-2 missile test-fired successfully and the test met all parameters”.

Joe Biden said on Wednesday the U.S. will send another $1 billion in military aid to Ukraine, the largest single tranche of weapons and equipment since the war began. The aid will include anti-ship missile launchers, howitzers and more rounds for the High Mobility Artillery Rocket Systems – all key weapons systems that Ukrainian leaders have urgently requested.

Senior opener K.L. Rahul is all set to miss the ‘fifth’ Test against England in Birmingham next month as he is unlikely to recover from a groin injury that forced him out of the ongoing T20I series against South Africa.

Why To Renew your health insurance plan?