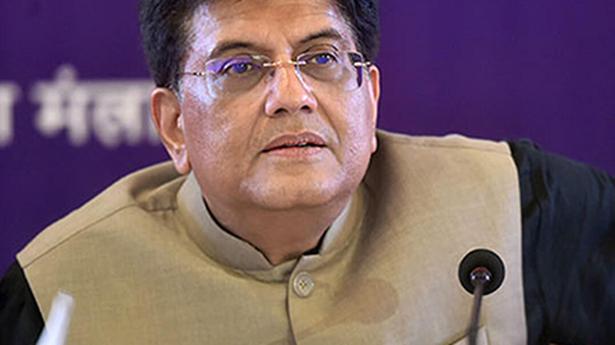 The Indian rupee was trading at ₹79.67 to a U.S. dollar in early trade on Monday

The Indian rupee was trading at ₹79.67 to a U.S. dollar in early trade on Monday

Indian rupee has shown more resilience than most of the other currencies in recent years and the compounded average growth rate of depreciation is lower as compared to pre-2014, Minister of Commerce and Industry Piyush Goyal has said.

He also said that exporters should not be dependent on a depreciating rupee and they should stand on their own based on the quality of products and ability to serve the needs of customers in the global markets.

“I do not think there is any comfortable or uncomfortable level for the rupee. Rupee finds its own place. It’s a function of several natural factors — a function of inflation, capital flows and the risk-reward ratio in each country. I am happy that the Indian rupee has shown more resilience than most of the currencies in recent years,” Mr. Goyal said in a media interaction.

To a query on what could be the comfortable level of the rupee where it does not hurt imports, and make exports competitive, the Minister said: “If you look at the Indian rupee solely before 2014, and if you took a CAGR [Compounded Annual Growth Rate] of the rupee depreciation, it was in the range of about 3.25-3.5%. Currently, the Indian rupee is depreciating at about 2.5% CAGR, so there has been a significant improvement in the strength of the Indian rupee.”

The Indian rupee was trading at ₹79.67 to a U.S. dollar in early trade on Monday.

When asked about the European Union’s plan to withdraw export benefits under the Generalised Tariff Preference Scheme (GSP), Mr. Goyal expressed confidence that Indian exporters will be able to supply significantly on the basis of their strength.

India’s exports from sectors such as plastics, stone, machinery and mechanical appliances worth about $8 billion to the EU would not be eligible for low- or zero-duty concessions from January 2023 after removal of GSP benefits by the EU.

“We are undertaking free trade agreement negotiations with them [EU]. We will focus on that negotiation. I don’t think GSP is necessary for expanding trade engagement in any case. It’s better to have an FTA with the EU. Without GSP [with the U.S.]our exports have not suffered,” he added.

On further expanding trade with the U.S., the Commerce Minister said every sector in America is an opportunity for Indian businesses, given the size and scale of the U.S. market.

The U.S. is a big player in international trade, given the fact that they are looking for massive expansion on technology, he said, adding, “the sky’s the limit”.

“The potential in the U.S. is to increase our trade from the current $159 billion to at least $500 billion in the next six to eight years,” he added.

“Of course, exports will grow, and there could also be some growth in imports. Ultimately, economic activity grows both ways. So, I am looking at international trade overall, taking a big upswing. But for export itself, we are very confident that by 2030, India will be aspiring for a $1 trillion export of goods and a $1 trillion export of services,” he said.

What is balance of trade? Types of trade balance